If you’re at all serious about cooking meat, you’ll want to use a meat thermometer. Even leaving aside the argument for safety aspects (some meats may harbor harmful Bacteria if not fully cooked) there’s just no other way to know when your meat will be perfectly cooked to your preference.

There are plenty of choices out there in the smart meat thermometer world so it’s worth double-checking what you’re getting: Is your choice wired, wireless, or “Mostly” wireless? Does it have a companion app? Can it be used in multiple cooking situations, and what’s its range? These food thermometers are some of the most popular options on the market.

There are many different styles of thermometers, and for a quick meal like hamburgers, a simple handheld probe will do the job. If you’re looking at a roast, ribs, or other meat cuts that will take hours to complete, you want a wireless probe that uses an app or otherwise has some level of connectivity or smarts. Selecting a “smart” interface can really help you take your cook to the next level by providing temperature Automation, alerts, and Notifications direct to your phone, meaning even if you walk away from the Grill – or the house – you’ll always know what’s happening under the lid of the barbecue.

Check temps for both meat and ambient heat

The MeatStick X is a true wireless meat thermometer. It uses a two AA battery-powered probe that connects to your Smartphone. It has two sensors, one at the base of the stick, and one at the point, to give you both the internal meat temp and the ambient temperature around it. It’s deep-fry, sous vide, and dishwasher-safe. The range is said to be 33 feet if you’re using it with an open grill or BBQ, and 6 feet with a closed grill or inside an oven. 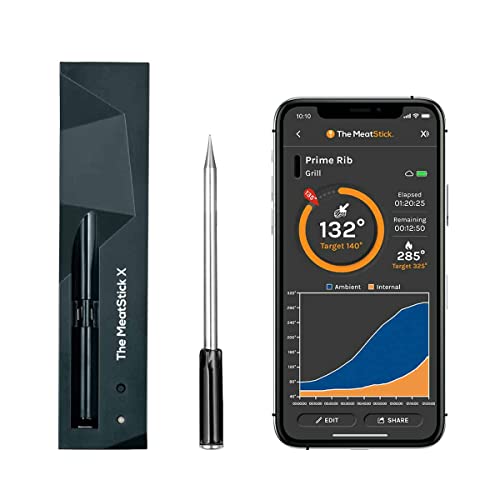 Check temps for both meat and ambient heat

Smart device in a small package

Yummly’s Smart Thermometer is also a wireless stick probe that connects via Bluetooth to your phone or tablet. It has dual temperature sensors and is charged via a dock that uses two AAA batteries. The charge lasts about 25 hours between charges. The thermometer isn’t dishwasher safe but can be cleaned with a soapy cloth. The probe is water-safe from splashes, but can’t be immersed in water. It can connect to devices up to 150 feet away. 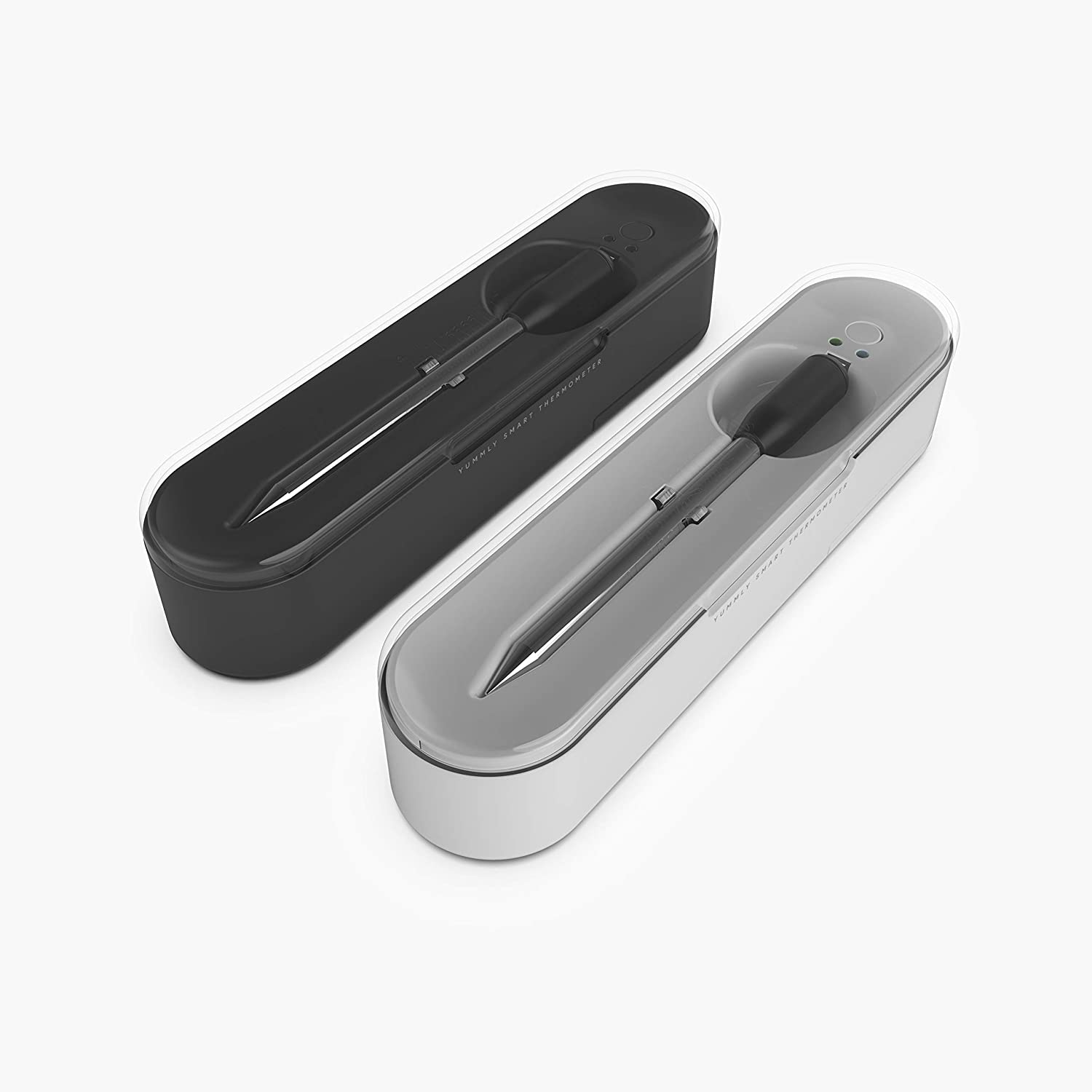 Smart device in a small package

Meater is a wireless stick probe that uses dual sensors to give ambient and internal temperatures. Its range is 30 feet (although the Meater Plus can read up to 150 feet away). The probe is dishwasher safe. Meater’s app is simple to use: Just insert the probe, and Meater claims it can tell what kind of meat you’re cooking. It will give you ranges of doneness, and you can adjust those ranges to your preferences. The Meater lasts up to 24 hours between charges, and it’s charged by a AAA battery in the attractive magnetic wooden storage case. For more details, check out our full Meater review. 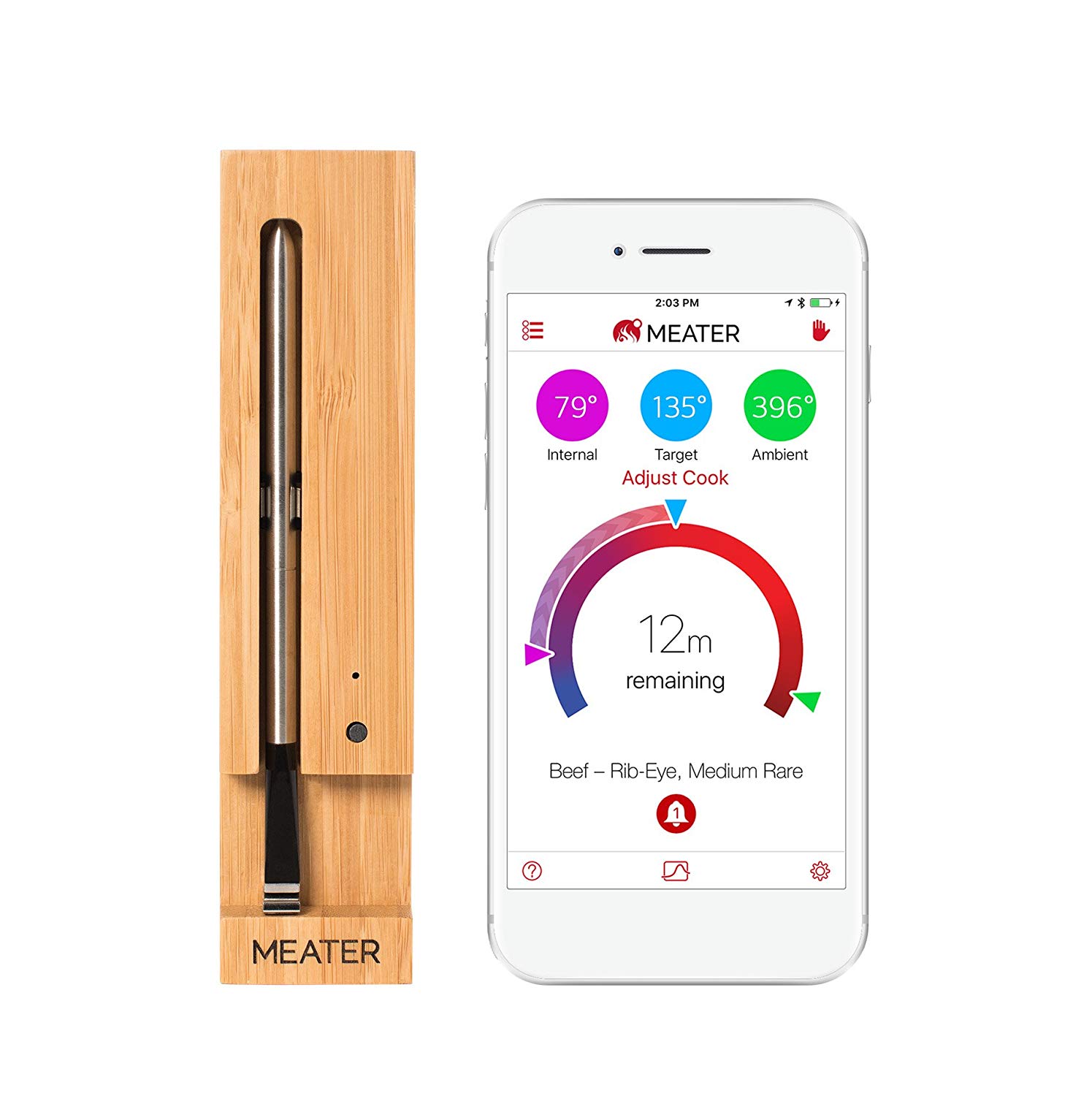 Weber’s iGrill 3 is a “Mostly” wireless meat thermometer that works a little differently than the others listed here. It’s specifically built to work with Weber grills and is made to be permanently mounted to your Grill. There’s no readout on the unit itself, so you’ll need to have the app running to see the temps. It uses a base station with wired Probes. The iGrill 3 comes with two Probes, and the base station can handle up to four. It’s powered by three AAA batteries and connects from up to 150 feet away via Bluetooth. 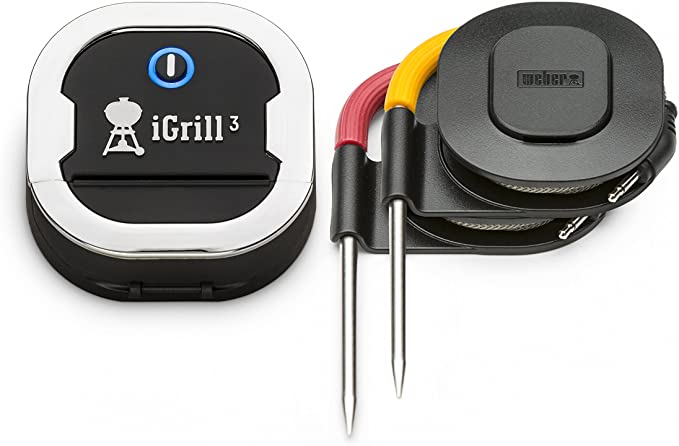 Multiple Probes for many meats & dishes

The Inkbird IBT-4XC is a “Mostly” waterproof meat thermometer. Like the iGrill 3, it has wired Probes that plug into a base unit. The Inkbird differs in that it’s totally portable, and has a magnetic back to keep it in place near your grill or door. It’s also the only probe on our list that has a built-in lithium battery that is recharged via USB. It has a range of 150 feet, and the app provides Timers, alarms, and estimated remaining time for your cook. 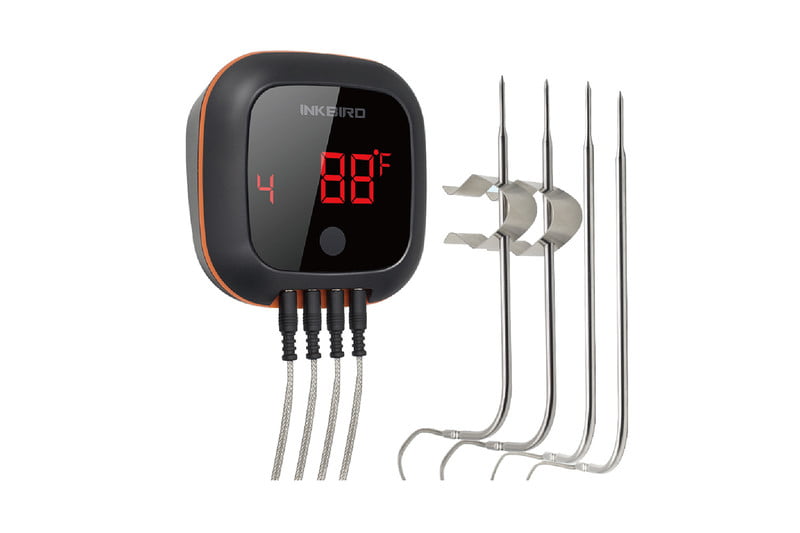 Multiple Probes for many meats & dishes

Why use a wireless meat thermometer?

When we’re talking wireless Probes, there are a couple of different Styles that you’ll want to consider. Some companies have gone with a completely wireless system, with a stick probe that is powered and sends a signal back to your Smartphone. The other style involves a probe with a wire that plugs into a base unit you leave adjacent to the door BBQ, which then sends a wireless signal to your Smartphone. So consider these options totally wireless, and “Mostly” wireless.

The beauty of wireless is that it means no more sticking around the house to watch a corded temperature probe. There are also issues with wires getting tangled, causing you to lose your grip on your roast in its heavy pan, and having to worry about burning yourself if they need to be moved. Wireless removes all of these issues and makes things easier and simpler, and that’s really the goal here.

The other main advantage is knowing exactly where your roast is in the cooking process at a glance. Not only can you see where the meat is heat-wise, but now apps also give you a chart to show the progress over time, and alarms / timers to tell you when your meat has reached the desired temperature. No more opening the oven or Grill a hundred times, slowing down the cook as you check again and again. For things like ribs – with multiple steps based on temperature – it removes all the guesswork: Just open your Smartphone, load the app and you can see it in an instant the status of your food. Still not sold? We wrote in-depth about whether a smart food thermometer is worth it so you can judge for yourself.

It’s also worth spilling some ink on other new technology designed to help you grill and barbecue better. Makers of gas grills, like Weber, are now building smart technology into their barbecues natively, so it may not be long before add-on devices are obsolete. Weber’s brand new Gensis smart Grill purports to be “the biggest grilling innovation in decades that creates a full backyard culinary experience”. With this Grill, you replace the cooking grate with custom-fit Weber Crafted grillware that uses Weber Connect smart technology, for real-time food temperature alerts. It sounds pretty futuristic and a bit hard to fathom, so we’re taking this one for a spin this spring. Watch for our review of the Weber Genesis smart Grill in the next few weeks.

No matter which wireless probe you go with, you can rest assured that you can pull your food off the grill or out of the door at the perfect time, and you can say goodbye to overcooked and under-cooked food.