Pressure Moments have cost Arsenal at various points of the season, leaving a shock Victory from Norwich City over Tottenham as the only way for Mikel Arteta’s side to creep into the Champions League places on the final day.

They have taken strides in 2021-22 in respects of finding their preferred starting XI and the style they want to execute, but irrespective of what happens on the final day – with Arsenal themselves needing a win over Everton to stand any chance of fulfilling their top -four dream – responding to setbacks will be a major area for improvement heading into next season.

On the opening day, they traveled to a Bouncing Brentford Community Stadium and lost 2-0. In December, they took the lead against Everton but lost 2-1. In April, they succumbed to the atmosphere of Selhurst Park once again in a 3-0 defeat before completing the set at St James’ Park on Monday.

These have not been Arsenal’s only losses this season, but provide a glimpse into issues that have held them back from making a fourth spot on their own.


Defeat at Newcastle on Monday meant Arsenal’s top-four hopes are all but over (Photo: Will Matthews / MI News / NurPhoto via Getty Images)

Often in these games, the first five minutes have given a good indicator of how things play out. If Arsenal are unable to start with good spells of sustained possession, they usually struggle.

It was the case against Brentford, Crystal Palace and Newcastle. All three teams were able to keep playing in Arsenal’s half, whether that be with long balls in behind for Strikers (Callum Wilson at Newcastle and Bryan Mbeumo at Brentford) to Chase before settling or being aggressive without the ball like Palace, which only improved the atmosphere in each of their grounds.

“We wanted to high-press Arsenal, make the game difficult and not let them settle into any type of rhythm,” Newcastle head Coach Eddie Howe said after Monday’s game.

Once under tangible on-pitch pressure, it’s a slippery slope. Decision-making and execution goes out the window, which makes regaining control that much Harder. At Newcastle, for instance, the more pressure Arsenal’s backline was put under, the more rushed their passing became. Aaron Ramsdale’s distribution became Shaky – Miguel Almiron blocked one of his passes in the eighth minute – while the Defenders in front of him began hesitating before making their passes.

This had two knock-on effects. The first was that Newcastle felt more confident to press higher and the second being that Ramsdale started going long more often, which did not play into Arsenal’s hands. Eddie Nketiah (5ft 11in) was facing Fabian Schar (6ft 2in) and Dan Burn (6ft 6in), with Emile Smith Rowe also starting, a situation in which itself is keeping the ball on the ground.

Failure to impose themselves on a high-pressure game with high expectations goes hand-in-hand with another theme that has held Arsenal back: their inability to draw or win games when they concede first. In the Premier League, Arsenal have now lost 10 of the 11 games they have conceded first in this season. That trend of conceding first tends to be followed by another which is even more frustrating.

Teams have an approach to disrupting Arsenal early, they also have one to protect their leads late. It’s not dissimilar to Arsenal’s approach in these situations as they sit back to Soak up pressure and ask Arsenal ‘Can you break us down?’. Too often the answer is ‘no’ after a predictable Plan B of a switching to a 3-5-2 which does not truly function.

Monday was not the first time Gabriel Martinelli was used as a left wing-back in these circumstances. It also happened in the 1-0 loss at Southampton, where Arsenal threw 31 crosses into the penalty box to no avail. While the small Squad is a factor, there is no denying the responsibility of that lies at the feet of Mikel Arteta and technical director Edu for the amount of outgoing business in January with no one coming in to keep the Squad rounded.

The reluctance to panic-buy was understandable, but Arsenal were not in need of a world-class signing at the time. It was clear quality reinforcements were needed in midfield and up front, which made the final days of January feel like a ticking clock.

Working largely with the same small pool of players may have played into how streaky Arsenal were, especially in the second half of the season. The majority of their wins were dependent on familiar themes such as what the back four offered in and out of possession and Martin Odegaard finding space to set the tempo. As explored, their losses also followed familiar trends. 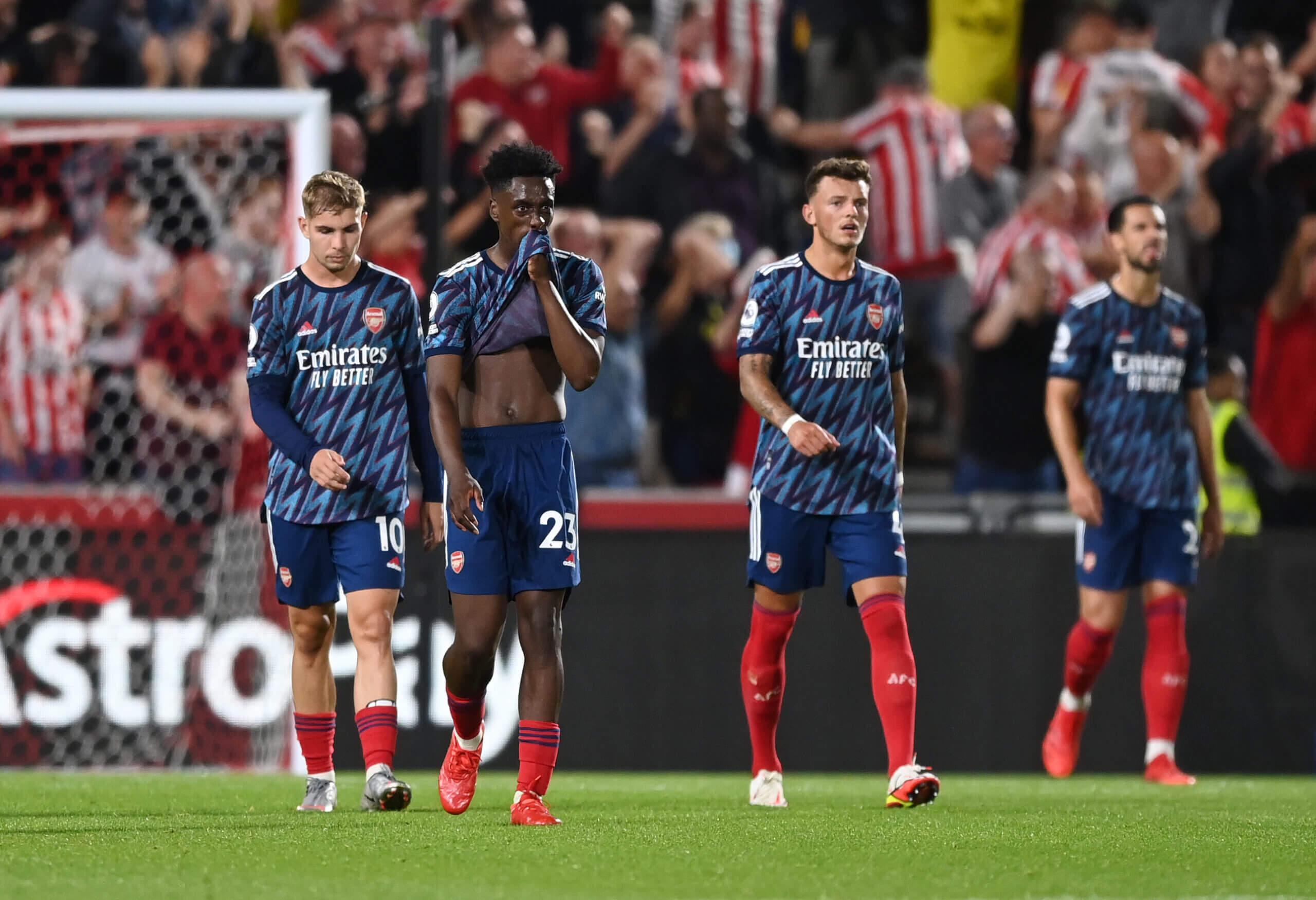 Arsenal’s opening-weekend defeat to Brentford was an ominous one for their season’s failings (Photo: Shaun Botterill / Getty Images)

Having the same players feed off the same momentum, whether positive or negative, left very little room for variation. Feeding off that momentum was key in April when the perception was they may struggle facing Chelsea on a Wednesday night and Manchester United on a Saturday lunchtime. On the other hand, the eight-day gap between the United win and a trip to West Ham was perceived as positive, but Arsenal’s performance at the London Stadium was incredibly sloppy – winning courtesy of two set-piece goals.

January cannot be re-done. Focus for now, the summer and next season has to be on how to stop the Trends that held Arsenal back this season.

The margins Arsenal were working in this season were too small to make continual errors. While there have been improvements in the balance of their attacking play, they have only scored one more Premier League goal (56) than last season’s tally with one game to play. They have also conceded eight more goals (47 compared to 39) in the league than last season, with that streaky element to their season Proving costly – suffering two or more league losses in a row five times across 2021-22.

The average age of the Squad this season is important. They are among the best performing teams for their age in the Premier League since 2010, but there are clear areas for improvement.

Understanding how to wrestle back control in games when their Plan A does not work is one; much of this season was spent laying the foundation for the style they want to impose on others, but Arteta and his Squad must build on that by ensuring teams don’t figure out how to nullify them and how to combat them if they try to.

Finding the solution for that is not a quick fix. This is where intangibles come into play, where Tactics and technical ability are less important. Does that just come with experience? If it does, then these may be experiences the current Squad can learn from. If not, finding quality reinforcements who have those intangibles to help maintain control in games is essential.

Either way, this season has made it clear where Arsenal still have room to develop. That it comes at the cost of a Champions League qualification will be extremely frustrating and Criticism will be justified, but it does not undo the visible progress in other aspects of Arsenal’s play over the course of the season.

With time ticking and the unknown of how rivals will strengthen in the summer, however, it is something they simply have to get right.