The Pandemic housing boom is still surging in many parts of the country, with property values ​​over April rising by 1.9 per cent in Adelaide, 1.7 per cent in Brisbane and 1.1 per cent in Perth.

Hobart was the only capital city besides Sydney to see prices fall over the month (-0.3 per cent), according to data released by CoreLogic on Monday.

In the other two Capitals, prices rose by 1.3 per cent in Canberra and by 0.9 per cent in Darwin.

CoreLogic head of research Tim Lawless said the data suggests the property boom has ended in Australia’s two biggest cities and is slowing down elsewhere as prices overwhelm buyers and the Reserve Bank prepares to hike interest rates to deal with surging inflation.

Lawless said that longer-term price Trends show the boom is even losing steam in cities where values ​​are still rising.

“Sydney and Melbourne are probably leading the cycle to some extent,” they said, adding that prices would likely start falling in other parts of the country before the end of the year.

“These are the two most unaffordable markets. So, arguably,
they are more sensitive to the higher cost of debt – and we’ve been seeing fixed-rate mortgages rising for more than a year now. ” 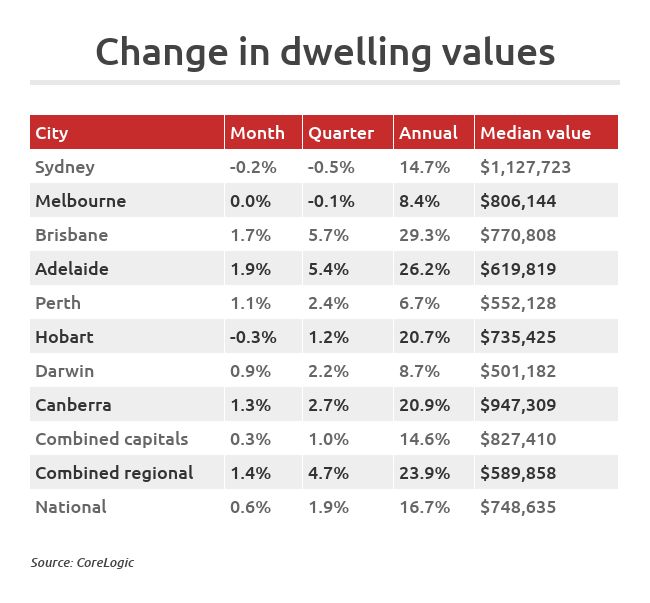 Economists expect the RBA to lift interest rates for the first time since 2010 in either May or June – with three of the four major banks forecasting the first hike to come on Tuesday when the central bank has its next monthly board meeting.

Lawless said higher listing numbers and weak Migration in Sydney and Melbourne also meant buyers in these cities had more choice and were under less pressure to bid up prices.

“So, finally, buyers in these markets are getting a little bit more leverage.”

Lawless said they would “probably endorse the forecasts coming out of the big four”.

But two government schemes designed to support homebuyers could somewhat minimize the falls.

Essentially, the Commonwealth will buy up to 40 per cent of an imposed home to reduce their Mortgage repayments by minimizing how much they must borrow from the bank.

The scheme would enable up to 10,000 home buyers every year to buy homes with deposits as low as 2 per cent while avoiding lenders Mortgage insurance and taking on less debt.

If Labor is elected, the program would be implemented alongside the Coalition’s expanded Home Guarantee Scheme which allows up to 50,000 eligible home buyers each year to buy homes with deposits as low as 2 per cent and with no lenders Mortgage insurance.

But under the Coalition’s scheme, the federal government only acts as a guarantor on the home loan and takes no equity in the property.

Both schemes have the potential to push up prices by Boosting demand without lifting supply.

But Lawless said the upwards pressure was likely to be mild as both schemes were subject to price and income caps and had limited places.

A version of this story first appeared in The NewDaily.

Media diversity is under Threat in Australia – nowhere more so than in South Australia. The state needs more than one voice to guide it forward and you can help with a donation of any size to InDaily. Your contribution goes directly to helping our journalists uncover the facts. Please click below to help InDaily continue to uncover the facts.