The 500 audience members were sitting in neat rows, and they’d definitely gotten the memo on attire: All were perfectly dressed in a classic gray Thom Browne suit.

They were very quiet, too, perhaps because they knew Browne’s show Friday evening was a special occasion, held in New York rather than Paris where they usually stages shows, to coincide with Monday’s Met Gala. But also probably because they were stuffed animals.

To be precise, these were teddy bears, lined in tiny chairs to hear the Motivational “Teddy Talk.”

It was yet another Browne extravaganza, more a slice of theater or performance art than a runway show, this time with an unusually playful vibe. In his narrated script, Browne – a consummate showman who is also one of America’s most successful designers – sought to educate the crowd of bears and humans (in bigger chairs) about finding one’s Authentic self. In this case, Browne was saying we all have a “toy version” that’s more exaggerated and crazier, but one that’s worth connecting with.

How did this high concept connect to fashion? That’s a question that Browne answers, luckily, with ensembles that are small feats of creative engineering. Here, his toy-store theme extended from countless versions of his classic gray suit, trimmed and pleated in brightly colored silks, to his Whimsical handbags and footwear, like the alphabet-block Purses and platform shoes, or the “Hector” handbags, inspired by his own dog, extended to toy ponies and other nursery Creatures. 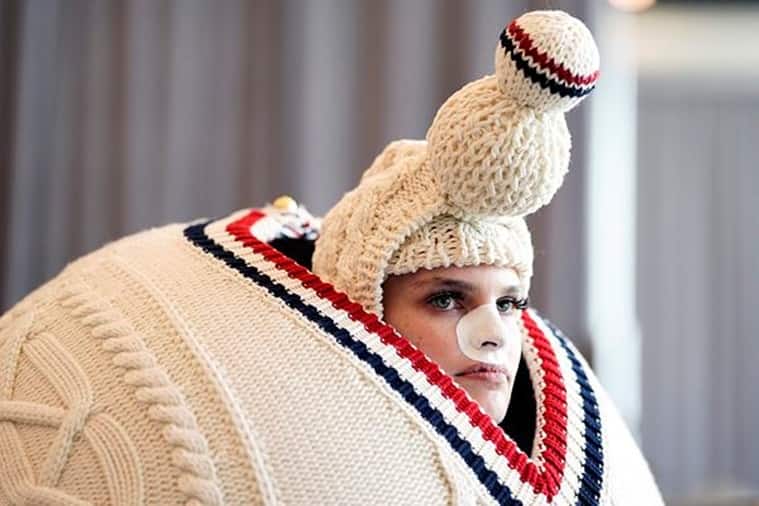 The model is seen backstage at the Thom Browne Fall 2022 fashion show at the Javits Center in New York. (Photo by Charles Sykes / Invision / AP)

The show, staged in an Airy theater on Manhattan’s far west side, began with two huge doors opening on an Imaginary shop. A few shoppers entered in tweeds and tall, stovepipe-like hats, a vaguely 19th-century look. One group together carried an extra-long “Hector” bag, with three sets of handles.

“New York, where you come to find yourself,” announced the soundtrack. “A lifelong search, a lifetime of questions… finally and completely answered.” The “Teddy Talk” was beginning. 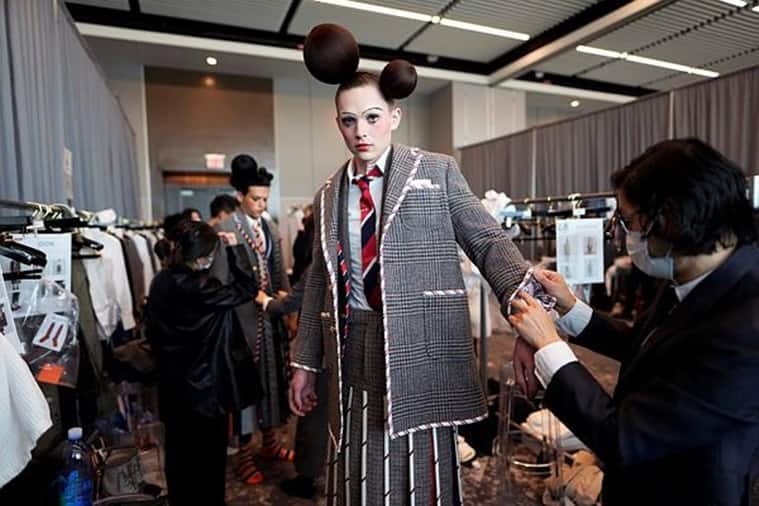 The speaker or “head bear” was dressed in a signature Browne gray flannel short suit, but with a teddy-themed hat and bear-like shearling gloves and platform boots. Via the soundtrack, he told his bear-filled audience about his favorite New Yorkers who had been lost, until they came to this store, “to find their true selves.”

The procession followed by 25 smartly dressed adults, both women and men in various tweeds and flannels but with the classic looks brightened with bright colors – red, white and blue trim, or sometimes gold and green. Their hair was styled in dramatic topiary-like creations amounting to head-topping modern sculptures. But the Fantasy element was yet to come: a second procession of 25 more models, each a “toy version” of one of the previous 25. 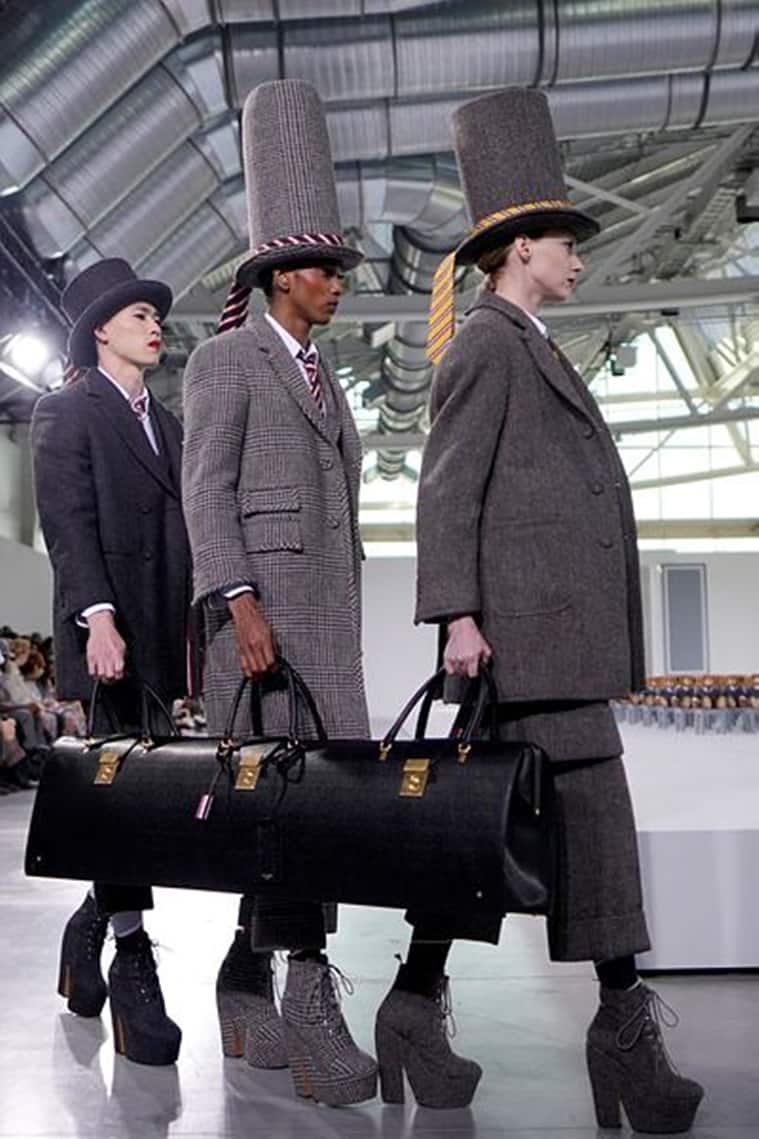 These human toys had splotchy makeup and exaggerated features. The toys they represented were old-school, like Slinkys, those classic colored alphabet blocks, or jack-in-the-boxes. Each “adult” element was exaggerated – sometimes literally blown up to fantastical proportions. Accessories were particularly fanciful, especially those alphabet-block shoes – literally piles of blocks which, it must have been, were better navigated by the female models than the men. 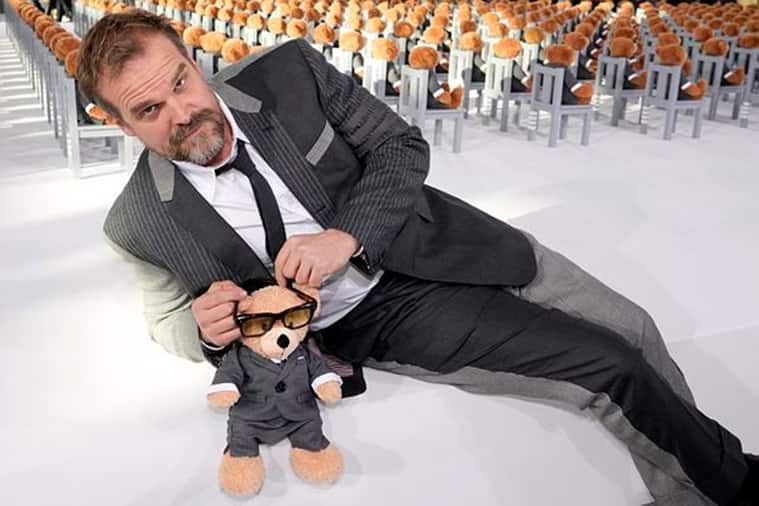 In the front row was recent Grammy Winner Jon Batiste, in a checked Browne suit, and actor-musician Leslie Odom Jr. in a cream-colored shorts ensemble, among others. Vogue’s Anna Wintour, three days away from the Met Gala she runs, was next to Andrew Bolton, head of the Met’s Costume Institute and curator of the exhibit to be launched by the Gala, “In America: An Anthology of Fashion.” Bolton is also Browne’s life partner. 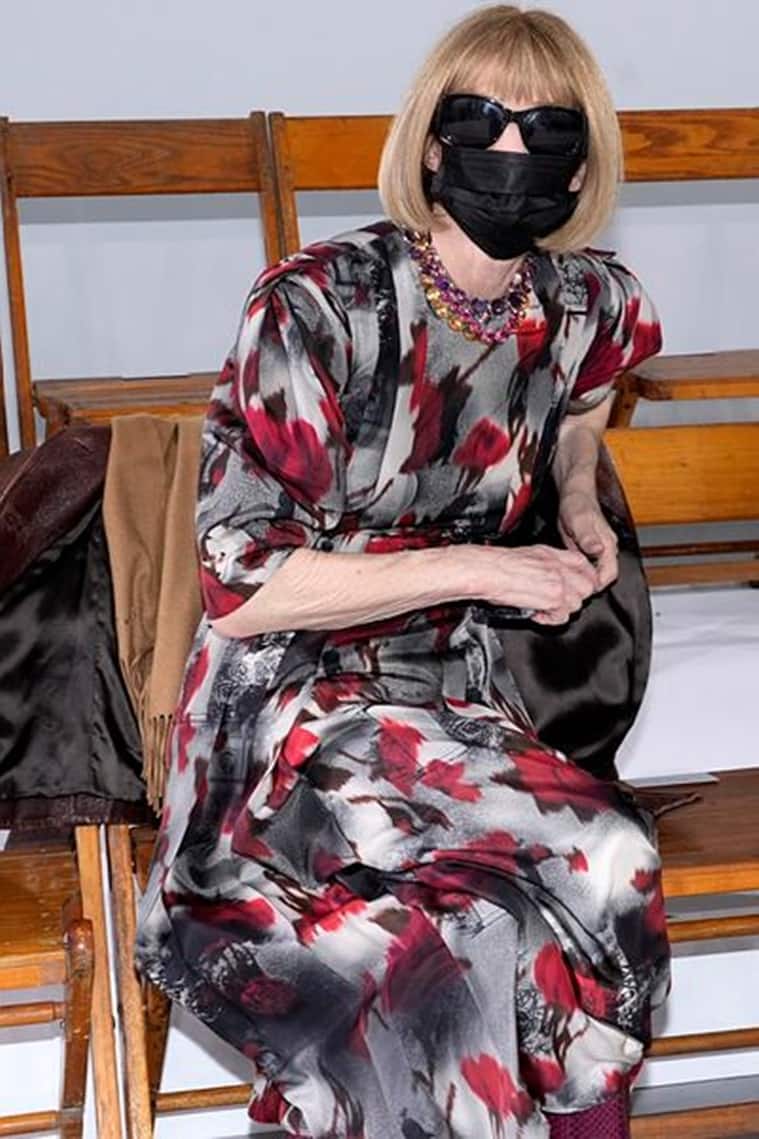 The culmination of the sartorial Storytelling was a “meeting” of the two groups, when both the adults and their toy versions came back out, then turned to face and actually speak to each other, Laughing and smiling.

Models Laughing and talking on the runway? That may have been the most unique element of all. “Finding your true self,” the speaker intoned at the end. “Unique. Authentic. Confident. Always be true to yourselves. ”