A “therapy dog” is providing some sorely needed comfort and entertainment for trauma Ukrainian children displaced by the war Raging in their country.

At the “Dr. Doc ”therapy center in the southern Ukrainian city of Zaporizhzhia, the kids are invited to stroke Evsei, a friendly Spaniel, shake his paw and play games with him, while volunteers sing and dance to entertain them all.

“It is important for them because the child’s psyche is very vulnerable to the war going on now… Some children are very scared – we bring them out of this state, ”said Olga Pivtoratska, 22, one of the volunteers.

“We help them adapt to the reality of Zaporizhzhia, which is quiet. There are no explosions here, ”she added.

Nearby are piles of clothes and other Humanitarian aid for the Refugees, many of whom have come from more eastern regions of Ukraine where the bulk of the fighting between Ukrainian and
Russian forces are currently taking place.

Alyona Serdyuk, the head of the center and a child psychologist, said the volunteers looked after the children while their parents got registered before moving to more permanent new homes.

“Our main task is to stabilize the children, help them cope with a really stressful situation. Here the children can play, sing, draw, play with our dog. If they need psychological help, we work individually as well, ”Serdyuk told Reuters. 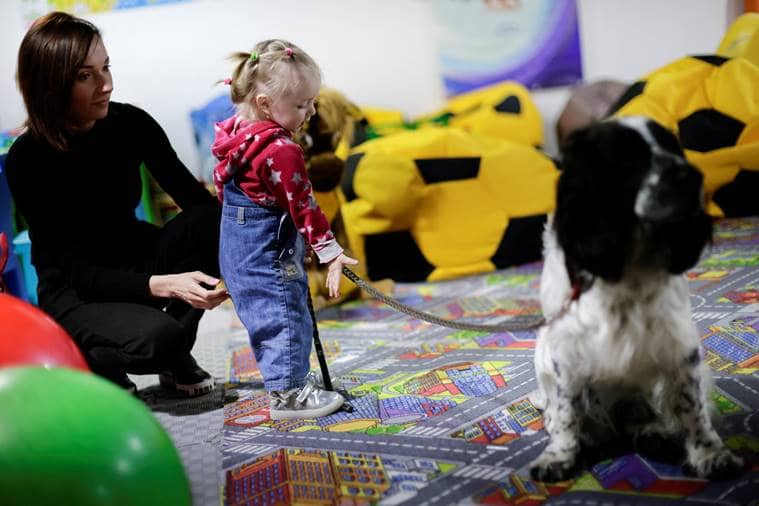 A Ukrainian child takes part in a therapy session with a Therapeutic dog, in a complex set up as a Shelter organized by volunteers, amid Russia’s Invasion of Ukraine. (REUTERS / Ueslei Marcelino)

One refugee, Daniil Savchenko, 20, cradled his pug dog Milo as he recounted his flight from Russian-occupied Berdiansk with his mother. ”(Milo) is definitely scared because even a small movement to the vet, which takes like 10 minutes in our native city, is a very big stress for him ”,” he said.

“I would actually go to (join) the Army if it weren’t for my mom because I don’t want her to have to live without me,” he said, as his mother, in Tears, kissed and stroked Milo.