A ‘bad skin day ‘can just be the pits. You wake up feeling a new bump, or bumps, forming on your face and you know it’s going to make you feel low.

Whether they’re big or small, pus-y and pulsating or dry but aching, acne, pimples and spots can really stop you from feeling like your best self.

It was a bad skin day of my own that I came across beauty and skincare influencer Maddie Edwards. I’d spent 30 minutes staring at myself in the bathroom mirror, deciding if I should just pop the angry red pimple above my lip and the one on my chin. I knew it would only make it worse, but I wanted to do it anyway.

It was a kind of self-sabotage – ‘how dare these bumps appear on my face, annoy me, distract me and make me feel ugly’. Plus, I was going out that night. I remember contemplating if I even wanted to go with my two big pimples on my face.

But the post I saw from Maddie stopped me in my tracks. It was a bare-faced photo, her own red bumps on display. She was about to head out to this friends and it didn’t look like she’d even be putting any make-up on.

She paired the selfie with an A-class caption that made me smile: “Side-eyeing my skin for treating me like a bratty child and throwing tantrums even though all I do is treat it with love.”

I felt my eyes Widen a little. I hadn’t seen this kind of content before. As I scrolled through her Instagram page, I learned acne and self-confidence were just a few of the things Maddie tackled.

Who is Maddie Edwards?

A qualified beauty therapist and make-up fanatic, Maddie gives insightful reviews of her favorite skincare and make-up products and also shares plenty of her favorite make-up looks. She runs an even more popular YouTube channelwhere she takes her followers through the ups and downs of her life and, of course, her skin.

What really caught me, though, was her other documented skin battle – with eczema.

Maddie has hundreds of posts where she has not only opened up about the adult acne that “graced” her face in her early twenties, but also her chronic eczema, which she’s been dealing with since she was a kid.

Speaking to 9Honey Style, Maddie says her struggle with eczema has been almost Harder than her previous Battles with cystic and mild to severe acne.

“I feel like I’m breaking up with the idea of ​​what my skin needs to look like.”

While Maddie’s eczema used to only cover patches of her skin, a stressful past year in and out of lockdowns and a moving house has caused it to flare up.

“Some days it’s actually hard to get out of bed because my skin is so tight and dry,” she says.

Along with the physical discomfort, there’s a heavy emotional side to this discomfort. Maddie’s found herself having to rejig her own ideas of her image, her body and how her reflection makes her feel.

“I feel sad when I look at myself in the mirror because I actually feel sorry for myself, which is something I never really had with acne.

“I feel like I’m breaking up with the idea of ​​what my skin needs to look like. I’m like, ‘Okay, I don’t look like that anymore. I need to let go,’ and I feel sad about that. “

Encouraging a new frame of mind

Maddie is incredibly honest about the way her skin can make her feel, and it’s refreshing to hear her voice the kinds of thoughts you feel deep down but often don’t honor.

Though she’s open about how her eczema and acne can get to her, she’s also the first person to turn those thoughts on their head. Not two seconds after explaining she’s “still pretty attached to how her skin used to look,” she was ready to embrace more helpful thoughts.

“I need to be like, ‘Okay, like, I’ve got eczema. It’s gonna come, it’s gonna go, it’s gonna affect me mentally and physically, but I need to accept that this is who I am,'” she says .

If there’s one thing at the center of Maddie’s message online, it’s self-love and inclusivity. Something she tries to imbue in her posts is the sense they are for everyone.

“I never want to make out like I’m suffering the now, because I know I’m not. I get so sad to know there are people with worse cases of acne or eczema or worse skin conditions,” she says.

Instead, Maddie tries to simply present her experience rather than offer advice, something she says can be pretty scary to hand out online: “You make one post about skin and all of a Sudden people think you’re the expert in every skin condition. “

Jokes aside, Maddie invests time in documenting her day-to-day skin Adventures in the hopes it might help someone, and includes important messages about self-love along the way.

Maddie is probably the best person to ask when it comes to describing what she’s all about. As she writes in her Instagram bio, “[I’m a] beauty and skincare addicted girl trying to force you to love your skin exactly how it is. “

It’s a pretty hefty goal, but it’s one resonating with thousands of people online.

The price of ‘perfect’ skin

One reason Maddie feels compelled to make a safe, accessible space for people to engage with online is because she knows how expensive and time-consuming it can be to get a handle on skin problems.

In fact, she had never sought help from a dermatologist until recently because the costs were so astronomical.

“It’s a real shame, because you can go to a bulk-billing doctor and get steroid creams, or in the case of acne, go on the pill or Roaccutane, but if you want to really take it seriously, you’ve got it fork out a lot of money. “

Maddie says even when she was trying to address her eczema more naturally, the prices were sky-high.

“I went to see a dermatologist / naturopath who took a really holistic approach,” she says.

“He made the creams himself, and it was about $ 400 the first time I visited, and the creams they made were about $ 100 each. It was crazy, and I had to go every two weeks.”

For a daily dose of 9Honey, subscribe to our newsletter here

For her, that amount was in no way sustainable, and she notes that for many people, especially young people, an exorbitant fee isn’t even “on the cards”.

“Not many 14- or 16-year-olds will have parents wanting to spend that kind of money on something like skin, and that’s understandable. I definitely didn’t want it,” she says.

Even now, Maddie says the dermatologist she’s seeing is about $ 150 for the first consultation – which is a standard price, but still a steep one.

On the brighter side, the consultations have brought some beneficial wins. One of these is that she has finally been diagnosed as a “severe eczema” sufferer.

The day it happened, Maddie, naturally, shared the news on her Instagram.

Alongside a number of candid photos of her eczema, covering her face, stomach, legs, hands and arms, she posted a very honest caption.

“Me and my eczema having an intimate photoshoot for my telehealth dermatologist appointment today. The doctor said I have severe eczema and I feel validated,” she wrote.

The next step of her skin journey is trying to get her eczema underway, but she’s not forgetting her commitment to helping every other person who stumbles across her page along the way.

“I really just value the fact that every person, in some way or another, has felt let down by their skin,” she says.

“But it’s also important for us to try and accept and love that skin, no matter what form it’s in. We should never let it get in the way of having a good time.” 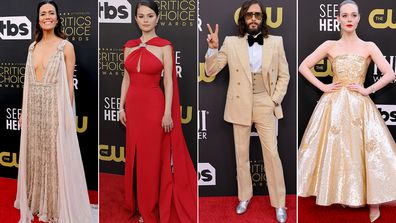 The best red carpet looks at the Critics’ Choice Awards 2022